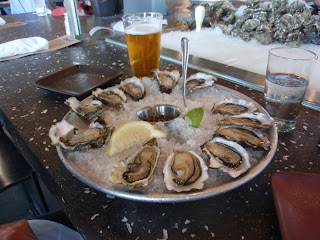 Well, not really. But it's the best way to remember which months are the best for oysters.  September, October, November, December, January, February, March, April - all of the other months of the year, oysters are busy reproducing, and are a little skinny, so they really are only recommended for the  barbecue.
(photo taken at Hog Island Oysters at the Ferry Building in San Francisco) 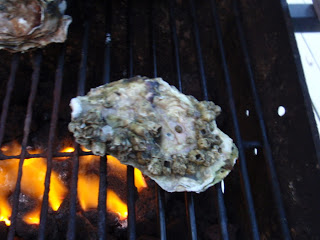 On the barbecue is about the only way that I will eat them!  Some of my favorite memories  of eating oysters, were grilled on my dad's barbecue, dipped in a spicy bbq sauce, on a hot summer day on the back of the Gypsy Miss.. .It was so fun to be anchored in Westcott Bay, in the San Juan Islands, we could then dingy into  Westcott Bay Sea Farms, and buy their fresh oysters right off their dock.  Little tiny Westcott petites.. a cross between  the Miyagi from Central Honshu and the delicious, tiny Kumamoto from Kyush, rich, sweet, salty. So perfect when dipped in lemon + melted  butter, or a spicy sauce.  My dad still talks about those oysters! 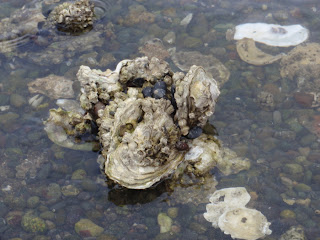 Growing up we had oysters on our beach, but the tide was too swift, and although my dad tried everything to get them to stay on the beach they would simply get swept out with the tide. Or the starfish and moon snails would feast on them, leaving nothing but the shells. Luckily, we were close to Hood Canal, and we did have friends that would invite my dad to bring a bucket to their beach!
(photo taken at Twanoh State Park - Hood Canal)
I digress...

Since we are starting prime oyster-enjoying season, I thought I would share some oyster ideas with you.   Who knows?  Even I, non-oyster girl,  might give these another shot!  They are Tom's favorite food.....

Oyster Stew - This recipe is pretty darn simple, and one that came from my grandmother and my brother, Jeff.  I had to call him to get the low-down. According to my him, this is all you need - no extra potatoes, etc.


1. Combine milk and cream in medium saucepan. Drain oysters, save "liquor" and add to milk mixture.  Heat milk mixture slowly until hot, but below boiling point.

2.  Saute' veggies in 2 T. of the butter until soft.  Add oysters and saute' briefly until edges are slightly curled.  Transfer oyster mixture to milk, and add salt and pepper.  Cook until oysters are nice and plump, about 3-4 minutes. Serve with chopped chives, and some french bread - enjoy!
(Small Seashell Bowls - $26.99 set/4)

Shuck the oysters and reserve them separately from the oyster liquor from the shell.  Discard the shells.

For the dressing, in a bowl, whisk together the reserved oyster liquor, the garlic, mustard, lemon juice, mashed anchovies and egg yolk until well blended.  Add the olive oil slowly in a steady stream and whisk until smooth.  Season to taste with salt and pepper.

Deep fry the oysters, a few at a time, until golden, 1 minute.  Remove with a slotted spoon and drain on paper towels.

Place the lettuce in a large bowl and toss with the dressing until the leaves are coated.  Add half of the Parmigiano and toss again.  Place on serving plates and top each plate with 3 oysters and sprinkle the top with the remaining Parmigiana.  Serve immediately.
This might be the perfect salad bowl for your gorgeous Caesar Salad!

Of course, you could always just make it simple and serve fresh, on the half shell.... a little lemon, some cocktail sauce...

Traditional Oysters Rockfeller (from All Recipes.com)

There's a few recipes to get you started for the oyster months!

Thank you so much for sharing these recipes.The Rockefeller recipe looks amazing. I may have to try it. Also, I love the votive candle holders.

Drawn to The Sea said...

I only eat mine fried. But I love those plates :-))

Can you believe I am surrounded by the ocean (I'm from Long Island), am an avid seafood lover, and never had oysters before? Don't get me wrong-- I want to! Next summer it'll be on my to-do list :)

YUM - my mouth is watering! Thanks for the inspiration. I love to eat oysters raw, but Gregg can't deal with that - he has to have them cooked.
Your dishes are gorgeous, as usual! What GOOD TASTE you have, M'dear!

We had a tradition in our house at Christmas and it was shucking oysters. My mother would be eating them while frying them up. To this day I can't stand eating oysters. LOL

Kate - I so understand you! Grew up eating oysters off the beach, and I am really trying to change my mind about them.

Erin - good luck with the oyster trying. Remember, the best time to eat them is really in the fall, winter and early spring. They are fatter and juicier!

Tracy - Nice to meet you!