So excited to introduce Andrew Ruffhead to our Everything Coastal readers!   I was simply drawn to Andrew's art, not sure if it's because I am from the Pacific Northwest, where our weather is so similar to North Norfolk, England - or it's his use of bright colors mixed with driftwood and "old marsh boats".   I think you will like Sarah Ruffhead's story too!

`Fish and Ships Coastal Art`, is a small Studio/Gallery in the pretty village of Burnham Market, a pebbles' throw from the coast in North Norfolk, England, owned by Artist-Designer   He produces and sells a diverse range of bright and witty coastal artworks; prints, coastal maps, cards, cyanotype photography, pen, ink and gouache drawings, and driftwood art. His lobsters, crabs, whales, prawns and fish are made from driftwood and pieces of old marsh-found boats and beach-found ephemera,  as he is particularly interested in recycling found objects. He has a large selection of work available to purchase in the gallery, as well as working to commission, and he ships worldwide.

" My work has been a hit with seaside fans all over the globe, and my fish have swam as far as , and . They do work well for those with a coastal abode, but look fun in any house with a coastal theme." 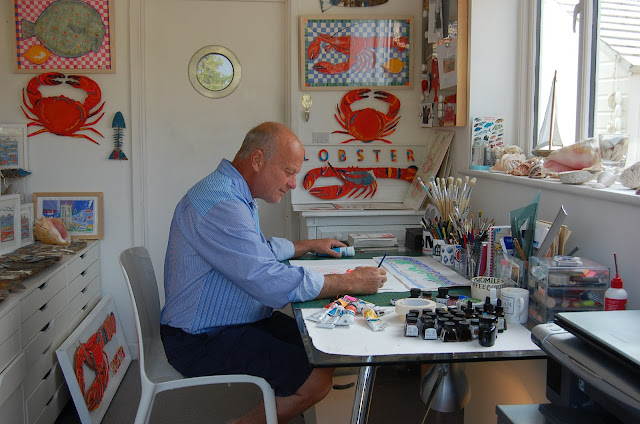 People love visiting the Studio as it is quirky and unique in that it only sells work by Andrew, and also he is `at work` too, drawing and painting at his desk, so customers can chat to him about his ideas and techniques, and he gets great feedback and inspiration from this as well.It is this interaction with the public that he particularly enjoys about his work as a full-time Artist, compared with his former years in London.

Andrew studied Painting and Printmaking at Brighton Polytechnic, and then Printed Textile Design at the Central School of Art and Design. He has worked for many years as a textile designer producing fashion, furnishing fabrics and wallpapers for companies such as Osborne and Little, Designers Guild and Calvin Klein.

Andrew is a Fellow of the Chartered Society of Designers, and a former chair of the Fashion Textile Discipline Group. He continues to exhibit his work in many galleries in the , and in 2006 he was made a National Lottery Artist, and was commissioned to produce a large lino-print, which is on display in the foyer of the in . He had one of his cyanotype prints,`Cactus Corner` on show at the Royal Academy Summer Exhibition in June-August 2011.

He relocated to six years ago and simply adores living near the sea, with its vast sands and big blue skies-walking, collecting shells, and beachcombing each day with his wife Sarah and Harry the Lurcher.  "I love the feeling of living `on the edge` that being here gives you, and I love finding the treasure trove that the tides throw onto the beach and marsh, such as wonderful worn pieces of old boats in lovely faded colours." 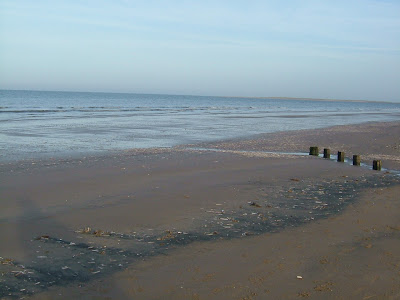 The Fish and Ships Studio is at Andrew and Sarah`s home, so it`s a quick stroll across the decking to work, "You will see from the sittingroom pic below, that we are shell mad! I work quite seasonally. When it`s warm and sunny, I make fish and large artworks outside, and when it`s cold and windy, I am in the Studio drawing" 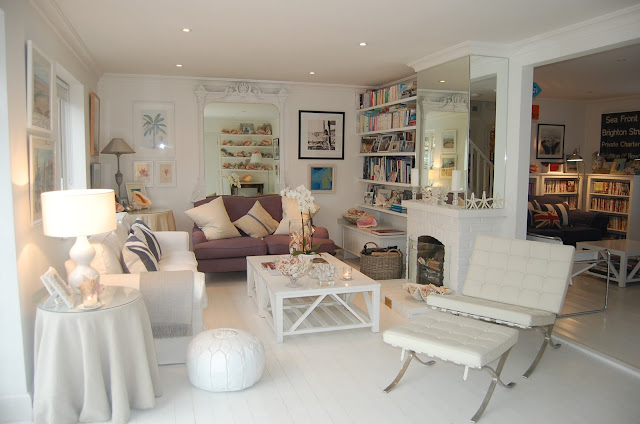 Andrew is keen on recycling and loves winkling out seaside treasures such as shells, rope, wood and pieces of old boats found on the beach and the marsh, which can be fashioned into fun pieces of coastal art. He recently found a 95 year old musselling boat called boat called `Washout` which was rotting in the mud at Brancaster Staithe, and the fishermen kindly said he could have it if he could haul it out of the mud. He has since been making lots of stunning fish from the weather-worn wood and copper and brass rivets. So it was an exciting find, and an interesting tale to tell too. 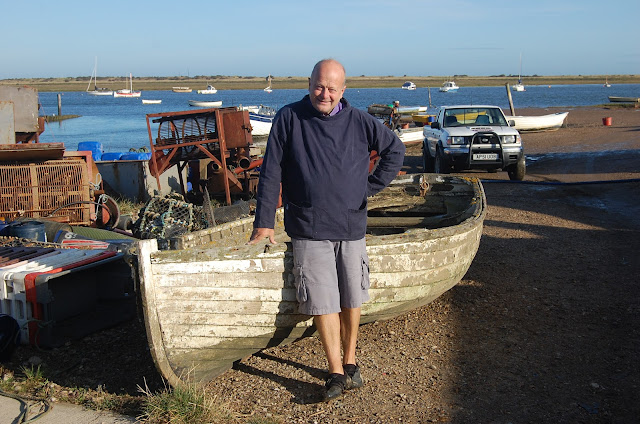 "I think my favourite pieces are the large wooden fish as each one is unique, every piece of wood tells a story, and each fish has a character of its own!" 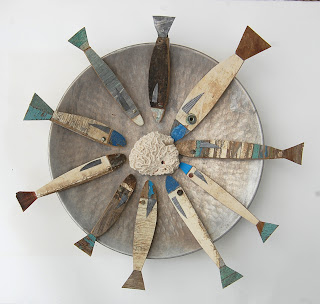 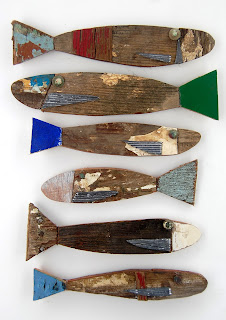 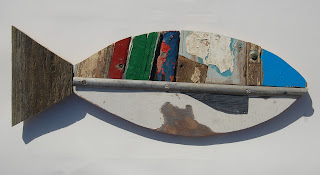 "Living near the sea we have a good range of seafood available fresh each day, and our area is famous for its crabs -particularly `Cromer Crab` from a few miles down the coast, and lobster which are caught off The Wash. Consequently any images of these are always popular with locals and holidaymakers alike, and I make and paint large crabs and lobsters and frame them in white clapboard frames." 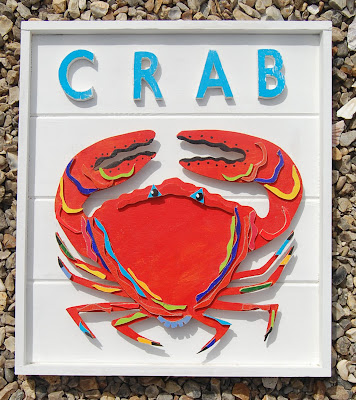 We also love eating mussels which are found at Brancaster a few miles from our house, and I was inspired to so a set of fun drawings of seafood which I have had made into A4 sized prints, which look great as a set and can be easily posted as I sell them unframed. 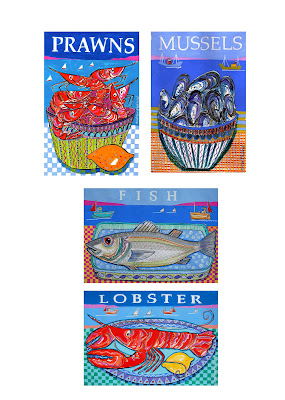 "I never stop drawing and always have my sketchbook with me wherever I go, as it is a valuable source of ideas for me.Often things that happen by accident are a great startng point for an exciting piece of work. So just draw draw draw!" 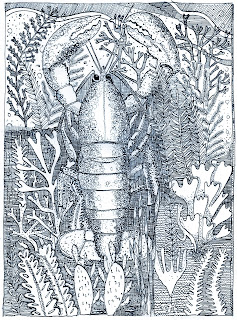 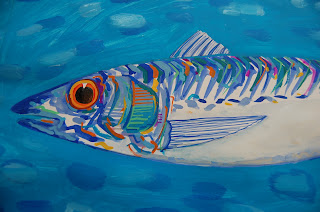 "My boxes with painted wooden Sardines in are very popular, and in have made quite a few in different sizes, I think it`s because they look fun, and of course blue and white always works well in any coastal theme looking clean and fresh.We love eating sardines-particularly cooked on olive wood on the beach in Spain where we have a holiday home too Delicious!" 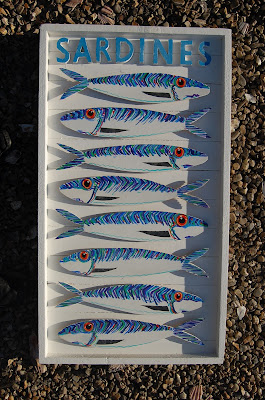 "I have just started making these framed maps-I have been buyng vintage coastal maps--just bought some American ones too!!!  I re-colour them and frame them in pieces of old boats , so they look quite quirky and of course very individual.  I can make these to order so they can incorporate a specific, favourite part of the coast for customers." 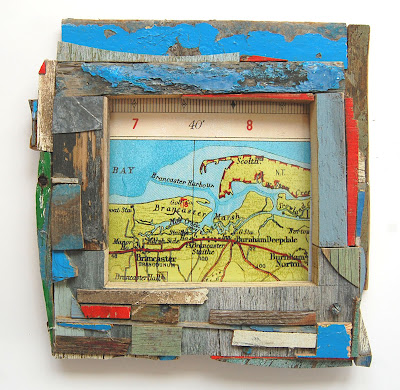 Andrew sells work not only through his Gallery , but from his website as well.
http://www.fish-and-ships.com

Thanks to Sarah Ruffhead for her generous guest blog post!

These are wonderful!! And I love nothing more than recycled. So creative!

i love these art works and the use of recycled timber!
& what a gorgeous home.
x

Thanks Barb, Maya and Cheryl! I so want to go visit this part of the world... one day after all the kids are settled and on their way.

How very interesting and what a wonderful talent he has!

Okay - now I just yearn to make a big fish. We used to live in NY, but not near the ocean. We'd go out to Montauk, and I loved it so much - the freshness of the breeze bringing bits of ocean to the brain - the movement, the fishing ambiance - I think of being there, and there's a little place, a tiny frame around that feeling in my life that keeps it separate and untouched by the more prosaic worries of real life. Anyway - the whimsey of the fish, I just wanna curl up around it. Thank you for letting me see them.