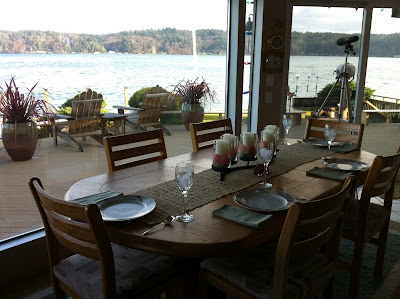 So excited to feature a guest blog post from my good friend Judy! (See my post from last winter - Just Beachy)  Judy and her husband Gordon invited Tom and I over for a Christmas brunch. Not only did we get a fascinating sea lion show from their dining room,   I got a first hand look at her gorgeous shell treasures from New Zealand.  Judy  is one lucky lucky lady, to have the opportunity to travel and pick up seashells from around the world! Can you tell, I might be just the teeniest bit envious? 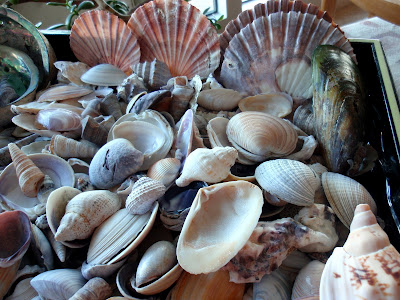 OK, I confess. I am unashamedly a full-blown shellaholic. And I know I’m not alone. Many of you reading this know what I mean when I say I love everything about shells – how they feel in my hands, how each one is different, how incredibly they travel thousands of miles before I find them and how, even with broken parts and rough edges, they are truly beautiful.

Show me a beach and while I’ll admire the sea and the setting, my eyes also will be cast downward in search of one of God’s treasures. I’ve collected shells on every beach I’ve ever seen, so when I had the chance to explore new beaches while attending a conference in New Zealand, I was in beachcomber heaven. 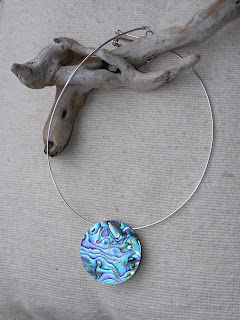 I was particularly excited to learn that New Zealand has what might be called a “national shell” that is used in beautiful jewelry and is an iconic design in many other forms of art from pottery to silver. It’s the Paua, a small, particularly colorful abalone, so not only was I on the hunt for such a shell, but I was determined to bring home a piece of Paua jewelry. 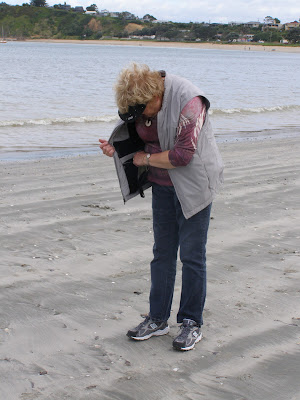 When I’m in a foreign country, such as New Zealand, I try to be a discreet sheller. I’m never sure how the locals feel about my taking shells off their beaches or what they’d think about some of them finding their way to Gig Harbor, Washington. So – no pails or buckets for me. Instead, I’ve got a lightweight jacket with a ton of inside pockets, plus long sleeves that zip off to become a vest for warmer days. I line those pockets with plastic Ziploc bags and I’m ready to discreetly collect my treasures … that is, after I’ve checked the local laws to make sure it’s OK. 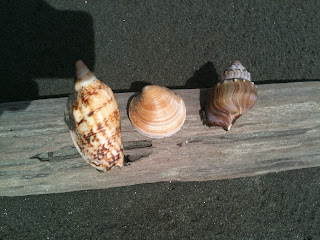 New Zealand’s north island has beaches on both the South Pacific Ocean and Tasman Sea. Playing hooky from meetings one day, we took the train east to Paraparaumu, a small beach town on the Kapiti Coast that faces an island wildlife reserve. We hit the beach on a windy but sunny day and had it to ourselves. We oohed and ahhed over the driftwood until we began to find beautiful striated shells that my shell encyclopedia says are Pacific Tritons. There were other colorful shells – clams and scallops and cones as well -- and before long, my jacket was bulging with shells that never would have found their way to my beach in Gig Harbor except in my pockets. 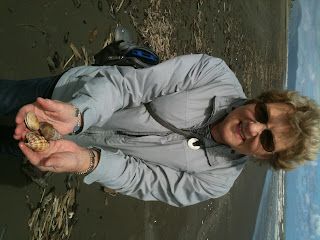 Other memorable shelling beaches were up north in the Bay of Islands, an archipelago where we spent five days with the Maori, the indigenous people of New Zealand who still practice their native culture. Each day, I wandered a different beach in my vest, finding flat scallops, colorful umboniums, terinas, terebras, augers and portions of pen shells. On one beach, almost every shell bore shades of blue; on another the shells were striped orange and white. I tried to be selective, but it was hard to resist them. 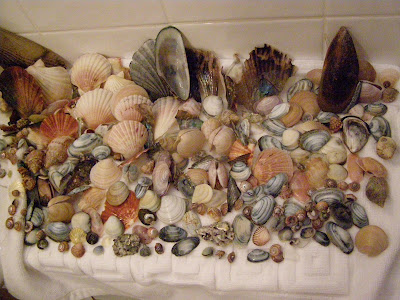 Shelling on a group tour can be problematic because shells need to be washed to eliminate unpleasant odors. So every afternoon I washed, sorted and dried my shells anywhere I could in our hotel room – the counter, the tub, the back of the toilet. But this wasn’t work – it was like sifting through a box of jewels. 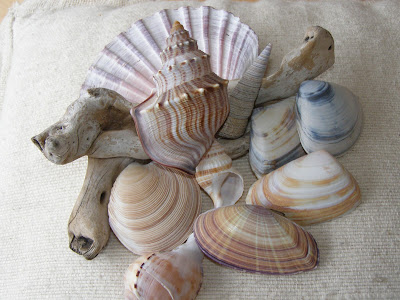 We stayed with friends near Auckland before coming home, and I took that opportunity to soak my shells in bleach and dry them in the sun. But wait – they live at Snells Beach, so there I was, gathering more and more because our hosts helped me fill my pockets.

While all this shelling was fun, we still wondered how we’d get all these little gems home. We’d collected nine pounds all told, and both our suitcases were already very close to the 5pound limit. What to do? We decided to divvy them up – put some in our checked bags and some in our carry-ons. We didn’t have to declare them – they weren’t fruit, vegetables, meat or living creatures, so the trip home was without incident. 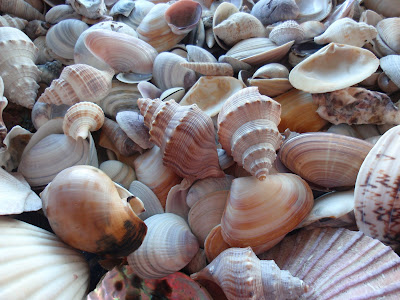 Now I have shells that I will simply admire for their beauty and also use in my shell art for Just Beachy. And I revel in the knowledge that these aren’t shells I bought from an online shell store in Florida; I picked these myself (my sore back was proof positive!), washed and sorted them, and will forever remember the wonderful beaches of New Zealand where I found them.

Yes, I’m a shellaholic and like another “aholic” we hear about, I found New Zealand’s beaches to be my own personal “open bar.”

Ok, I'm drooling :)
NZ is a huge draw for US ex-pats. My guess is they are all shellers. NZ would be my kind of open bar too!

Kaybe sent me over to drool - and drool I am! Love your secret shelling vest.

Wow! I can't believe you found all those beautiful shells. I've paid dearly for the shells I have. I think I got most of them in Florida. When we were in Hawaii visiting my husband's aunt, we found out you could not take shells out of Hawaii. We dug around anyway and found a few, but I didn't take them. They weren't beautiful like the ones you found. My mother loved shells, too.

Could you please give us some ideas on how to display them? I have some of mine in a rectangular shaped glass box with a lid and that looks pretty, but I can't come up with other ideas. It would have to be covered because I have cats.

We sound so much a like! I would recommend calling the customs agent in Hawaii, he's very nice and will tell you everything you need to just ship shells through postal service. Its a great back up plan when you canny spread them out in your suitcase!
Love the post, thanks Caron for having her!

Mary - that is a great idea! Look for a post a little later this week, have some very easy ideas for displaying seashells for you.

What a delightful post - I'm always in awe of beaches which such lovely natural treasures...just divine.

Stumbled across this webpage and I'm astounded by what you have found! Lovely shells! Just returned from New Zealand and managed to find some Ostrich Foot Shells and a Quahog? I'm not sure... tried searching for them online but none of the NZ shell blogs have a similar shell!