A First for Tom - Oyster Shucking!

One of my goals this week was to help Tom find some fresh oysters, so that he could try to shuck them raw and enjoy on his deck.  (I opted for the wine and cheese!)

If you remember, we did go to the Hama Hama oyster farm in August in Washington, but during the summer, oysters should only be barbequed, not eaten raw.  Oysters should be eaten raw only during the "R" months, all other months of the year,  they are edible, but a little skinny.  (Hood Canal Oyster Adventure) 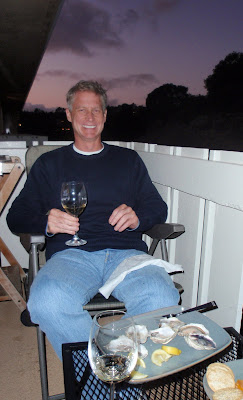 We read a great article all about seafood and sustainability in Sunset magazine. "FAQs at the Fishmarket", was just a small portion of the article and it was where we learned where the best seafood markets were. It is also where we learned that we could buy oysters in Half Moon Bay at the New Leaf Community Market. (P.S. Great Store if you live in the Bay Area) Funny thing  though, we bought Washington Fanny Bay oysters in a California market!

The first night here, we bought an oyster knife at our favorite Belmont grocery store, Lunardi's. Tom gave it a whirl, placing knife in the "hinge" of the oyster shell and gently prying open the shells as he held them in a dish towel.  As you can see from his beaming face, it worked beautifully and oysters on the half-shell were served with a fabulous glass of Sauvignon Blanc from St. Clemente, a local Napa winery.
Posted by Everything Coastal