Guest Post from my friend Sally Lee by the Sea...
Thanks so much for letting me feature your North Head Lighthouse story! This is one of my very favorite places to go on the Washington Coast.  Have witnessed some AWESOME storms at the Lighthouse, and down on the jetty, gigantic waves crashing against the cliffs at Cape Disappointment...
The century-old North Head Lighthouse, completed in 1898, sits atop a bluff in one of the windiest locations in the United States. Winds frequently clock at over 100 mph, guarding ships through the trecherous waters, known as the "Graveyard of the Pacific." The Lighthouse is a favorite stop for visitors and one of my favorite places in the world. This 65 foot tall conical lighthouse sits north of the mouth to the Columbia River in Southwest Washington. 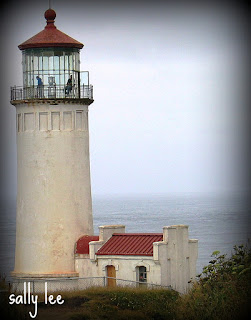 Since I live in close proximity, the Lighthouse is one of my favorite escapes, whether it be for sharing with friends and family or if I just need a break from life. A short stroll through the rainforest-like terrain provides numerous opportunities to view nature at its finest. We especially love to walk on the tiny Lighthouse Keeper's path which provides especially beautiful photo opportunities. The Lighthouse was designed by German-born engineer C.W. Leick and sits on solid basalt more than 190 feet above sea level so it provides glorious views of Oregon to the South and the Long Beach Peninsula to the North. 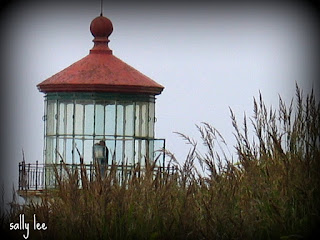 Each changing season provides a new and unique experience. We trekked to the lighthouse after a freak snowstorm when the ground was covered in a lovely blanket of white.  Without a single other soul to be seen or heard from, the area was quiet, still and peaceful...even the ocean. During one of our summer visits we got caught in a fast moving rainstorm.  The storm produced fierce winds and rough seas that crashed loudly upon the rocky terrain below, however the Brown Pelicans flew around in utter delight and amusement. It was a sight that I'll soon not forget. 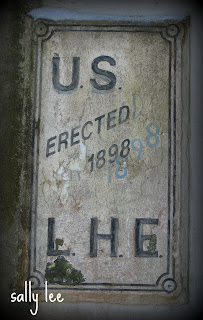 Before there were lighthouses on the Peninsula, ships bound for Portland and Astoria navigated their way through high waves and shifting sandbars, focusing on fluttering white flags and notched trees along the shoreline by day and flickering signal fires by night. These methods were crude at best and, despite heroic efforts, the sea offshore of the Long Beach Peninsula became known as 'The Graveyard of the Pacific'.
North Head has a neighboring lighthouse, Cape Disappointment, that is similar in shape, and painted in a unique stripe pattern so that the two can easily be recognized during daylight. This marking is called a daymark. Both lighthouses are fully functional and were taken under the jurisdiction of the U.S. Coast Guard in 1939. 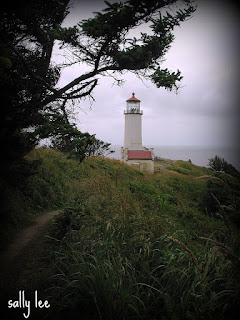 After the last keeper left North Head in 1961, the lonely lighthouse began to deteriorate. Luckily the Coast Guard restored the lighthouse in the mid-80s and opened it to the public under the direction of the Cape Disappointment State Park. The keeper's dwellings are nestled a half mile into the woods from the lighthouse itself, and have also been restored. Today, half of the dwellings house park personnel, but the other half and a single-family house are available for overnight stays. 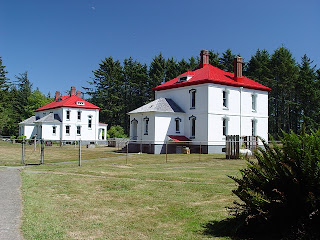 If you venture to the Southwest Washington region, I highly recommend you stop by the Cape Disappointment State Park and especially the North Head Lighthouse where you'll feel like you're on top of the world.
http://www.funbeach.com/attractions/lighthouse-northhead.html

Please make sure you stop by Marie's blog - she's got great coastal ideas too!  http://www.sallyleebythesea.blogspot.com/
Thanks for stopping by!

Thank you Everything Coastal for featuring our story...it's been a while, I think it's time for another visit to my favorite escape :O)

Marie @ Sally Lee by the Sea

One day I'll do a lighthouse tour - the only one I have visited since I came to the States is Point Reyes, and I didn't see it at all, too much fog!

This is a great story. One of these days I would like to do the lighthouse challenge that is held every year by us. You have to visit so many lighthouses in the state in one day.

I have seen several places and lighthouses all over the world, and I can say that this is one good place to see.

Why not try going on a trip to the English Riviera and go on a Torquay holiday ? They have all weather attractions, beaches, family cafes and a lively nightlife - truly promising for guests of all ages.

Torquay Holiday -
Would love to go for a trip on the English Riviera - absolutely on my bucket list! Thanks for your comments