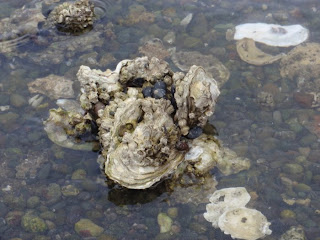 Tom, my oyster aficionado boyfriend, came up to visit last weekend, so I thought I could show him some "real" oysters on the Hood Canal. We began our fun drive in Belfair and then around the South Shore, all the way around to Quilcene and then back across the Hood Canal Bridge at Shine.  For local (and not so local!) Sunday drive fans, this is just a great stretch of curvy road!  There are plenty of parks to stop at, interesting beaches to explore, a few wineries,  and farm fresh products to buy.  Not to mention the views of the Olympic Mountains to the West and the absolutely gorgeous homes to drool over and dream about.  Hmmmm.... one day maybe? 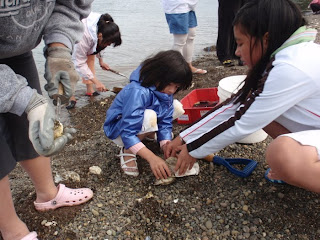 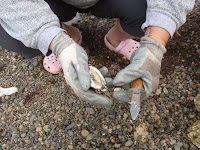 First Stop Twanoh State Park: If you haven't ever stopped here, you are missing a little jewel! The park was created by the CCC in the 1930's, most of the building are still used today - built of native logs and sturdy bricks.  The beach is covered in oysters and little manilla clams, all can be yours with a shellfish license, a bucket and a little grunt work.  Oysters have to be shucked on the beach, leaving the shells for future oysters to grow. Although it was a little cold and gray as we strolled out to the beach,  we didn't mind. Tom was amazed at the oysters just lying on the beach waiting to be shucked and taken home! 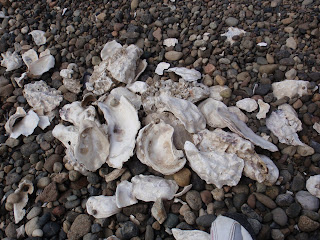 I offered to take pictures of a group of family and friends that we met on our walk, having the best time shucking oysters and then running up to bbq them and steam fresh clams.  Funny how while at the beach, it is so easy to make friends... so generous that they opened up oysters and shared them with Tom.  Wow! His first oyster fresh off of the beach!

Second Stop: Hunter Farms  just past Union on the way to Potlatch.  Great farmstand!  We were hoping to find some fresh oysters in the shell to buy, since we couldn't take any off of the beach.  No such luck here, but bought incredibly yummy local ice cream - french apple pie and pecan/caramel swirl.  In my opinion, some of the best ice cream I have ever eaten!  Lots of fresh corn on the cob, local squash, tomatoes and fruit. 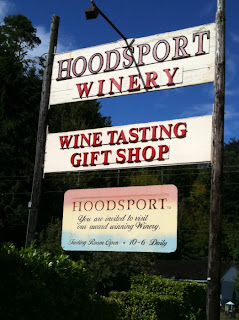 Third Stop: Hoodsport Winery in Hoodsport  This winery has been producing wine on the Hood Canal for over 30 years!  What I think sets this winery apart is that they produce wines that are made of other fruits, more than just grapes. Blackberry, Raspberry, Apple, Pear.. Their most popular selling wine is Raspberry, the #2 seller is Rhubarb.  Tom and I were the only ones in the tasting room that afternoon - what fun!  We each got 6 tastings, please don't worry, they were small and we were still full of ice cream. 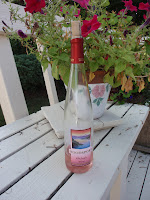 Of course, we had to ask what their recommendation was for enjoying with oysters. Believe it or not, it was the Rhubarb!  So, we bought a bottle of Rhubarb and a very nice 1999 vintage Lemberger-Cab. 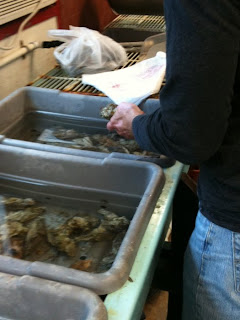 Fourth Stop: Hama Hama Oyster Company!  This was pretty cool! You can buy smoked salmon, shucked oysters, seafood salad, but best of all you can pick out your own fresh oysters (still in the shell)  from their hand selected buckets.  We learned so much about cooking oysters that afternoon from the extremely helpful gal in their store! 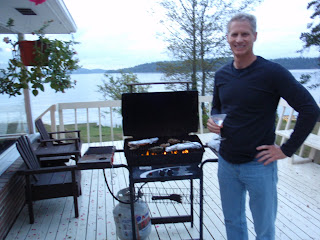 Those of you that are oyster fans probably already know that if you buy oysters during the summer months they really are only good for bbq'ing.  Apparently, they are not plump because they are all used up from reproducing.  Raw oysters are better to eat  in the "r" months.  She told Tom some inside secrets about barbecuing the right way... that's him enjoying a Martini at Mom and Dad's house! 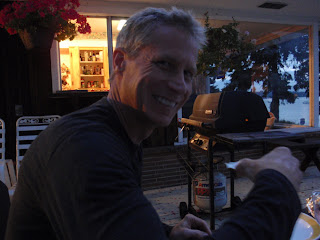 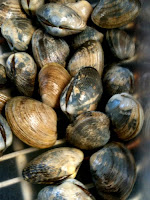 Have to admit that I was really, really trying to psych myself up to eat bbq'd oysters.  Tom was so excited about trying to cook them, and I didn't want to disappoint him, but just in case I picked out a bunch of manilla clams for me.  Love the colors on the shells, and boy did  they taste terrific steamed in a little white wine, sweet walla-wallas and garlic.  yum!
Posted by Everything Coastal

What a fun time! I love all your pictures. Next time, come on down to Olympia and do some hunting and I will join you :-).
Krista
www.KBWomen.com

I adore you blog!! We follow each other on twitter! I am real sick right now with swine flu but I have to go and look up others sites so that I can get my spirits up :-) Any hoo...I hope you follow me on blogspot it is donnasfinedesigns.blogspot.com
Not as beautiful as yours but I am a home stager and believe me, if I lived in the west coast you would be my best friend!

I used to live in NJ and went to the shore a whole lot of times, Lavalette actually, about 2 hours north from Cape May, the end of NJ. I now live in Atlanta and I miss water! Even though I could take a day trip to Savannah. I want so badly to move there but my kids have 2 years left in school, they're the end of the line of 5 children. If I moved them AGAIN I think they will seriously kill me!

I wish to God the economy wasn't so bad. I lost my job back in Feb and I can't find a damn thing. My husband is disabled, I remember when we would go to the beach and he would swim and float and now he can barely walk, had to failed back surgeries due to an accident.

Anyway, I didn't write to bring up sad things I want to meet people and I'm glad you're following me on twitter and I'm glad I found your wonderful beach loving, blog! Hope to hear from you. My web site isn't much but it's a start. I also have 3 web sites with art to buy. Go onto this one first:
www.discoveredartists.com/donnasfineart.com
I'm on etsy too but who isn't! Talk to you real soon. Thank you for making me smile...